Book in a Blog Post is a series of posts in which I attempt to condense the major points and lessons of an entire book. My goal for each post is twofold:

Today’s edition (the first!) features Cal Newport’s So Good They Can’t Ignore You.

Everyone desires work that is fulfilling, impactful, creative, and independent. Is the common wisdom surrounding the pursuit of such work misguided? If yes, what’s the optimal path towards it?

In his book So Good They Can’t Ignore You, Cal Newport argues against the ubiquitous message of finding your passion. He claims instead that fulfilling work requires rare and valuable skills — and that such skills are obtained with deliberate practice. As these skills are acquired and nurtured, they become capital that can be traded for more rewarding work.

The book opens with the story of a man named Thomas, who believed he would find happiness within Zen Buddhism. He thus pursued life as a practitioner with an unrelenting clarity and passion. Years later, at a monastery where he was practicing lay monk, Thomas had a stark realization: he was fundamentally unchanged.

This was a tough pill to swallow. Despite fulfilling his dream to become a Zen practitioner, Thomas still had the same unsettled feelings about his life. The key to his happiness did not lie in simply following a passion for Zen Buddhism.

Thomas’ story is foundational to the question this book seeks to answer: If following your passion isn’t useful advice, what is?

Here are the key points Newport lays out in service of providing this answer, which I’ll expand upon below: 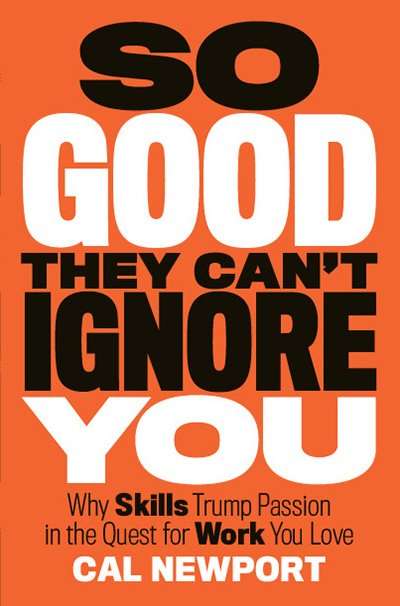 The craftsman vs. passion mindset

Newport summarizes the craftsman vs. passion mindset as follows:

In essence, the craftsman mindset encourages bringing fundamental curiosity and ambition to your work. Rather than demanding fulfillment from your job at the onset, you must demonstrate value first.

In order to deconstruct the passion hypothesis, Newport turns to Steve Jobs.

During his now-famous 2005 Stanford commencement address, Jobs quipped that “The only way to do great work is to love what you do. If you haven’t found it yet, keep looking, and don’t settle.”

Newport digs deeper into Jobs’ path to founding Apple. What he finds is that Jobs actually started out with a small-time ambition of making a few extra bucks. His vision only evolved and grew into something much bigger through stages.

So, it isn’t as if Jobs settled on his passion from day 1 and went after it. By some accounts, Jobs actually exhibited disdain for a career in technology early on.

Newport goes on to share other similar anecdotes from now-successful entrepreneurs and entertainers. He concludes:

“Compelling careers often have complex origins that reject the simple idea that all you have to do is follow your passion.”

It’s important to distinguish that Newport isn’t downplaying the significance of passion when it comes to work.

He’s simply cautioning that it shouldn’t be viewed as a necessary precursor to finding fulfillment through work. Rather, he concludes, passion is a side effect of mastery.

To demonstrate his career capital theory, Newport tells the stories of Alex Berger and Mike Jackson.

Now a successful television writer, Alex Berger moved to Los Angeles lacking concrete career goals. Once there, he assessed what was valuable in the market, and worked aggressively to acquire the necessary skills.

He obtained lesser positions, putting him around those he wished to emulate. Then, he worked relentlessly to perfect his screen writing on the side.

After ungodly hours spent writing and receiving feedback , Alex arrived at his sought-after stature. He didn’t set out to become a television writer, but he didn’t get there by accident.

Then there is Mike Jackson, who’s attained partner status at a cleantech venture capital firm. Mike’s job is so desirable, he can’t keep up with emails from business school students who aspire to his title. But it isn’t as if working in VC was ever Mike’s goal or ambition.

Much like Alex above, Mike’s path wasn’t defined by passion. Through graduate school, leading a highly successful energy research project, and founding an energy startup, Mike arrived in VC.

Yet, he hadn’t even considered VC until the short window of time leading up to his interview at the firm. An interview, by the way, that was arranged through happenstance by an unlikely connection.

“Alex and Mike both focused on getting good — not finding their passion — and then used the career capital this generated to acquire the traits that made their careers compelling.”

Deliberate practice as a key to success

“Most knowledge workers avoid the uncomfortable strain of deliberate practice like the plague, a reality emphasized by the typical cubicle dweller’s obsessive email-checking habit — for what is this work if not an escape from work that’s more mentally demanding?”

To highlight the significance of deliberate practice, Newport turns to the game of chess. More specifically, he looks at a research study that was published by a psychologist named Neil Charness. Charness and his team studied the practice and habits of chess players, hoping to find what separated the elite.

The study gathered data spanning multiple decades. It focused not only on how long chess players practiced, but how they practiced. The data did not leave much room for doubt. It didn’t merely find that hours spent in serious study of the game was the most important predictor of skill. It found that it dominated the other factors, such as time spent in tournament play.

“If you can figure out how to integrate deliberate practice into your own life, you have the possibility of blowing past your peers in your value, as you’ll likely be alone in your dedication to systematically getting better. That is, deliberate practice might provide the key to quickly becoming so good they can’t ignore you.”

The dream-job elixir and its traps

Having applied the craftsman mindset to acquire career capital through deliberate practice, you’ll have reached a new summit. That is: the power to claim control over what you do, and how you do it.

Newport labels this level of control as “the dream-job elixir”. Due to its power, reaching for it can be tricky:

“The key, it seems, is to know when the timing is right to become courageous in your career decisions. Get this timing right, and a fantastic working life awaits you, but get it wrong…and disaster lurks.”

There are two traps to be mindful of when attempting to claim more control in your career:

Newport provides an example of internal miscalculation through the story of Jane, a talented student at a competitive university. However, Jane wasn’t inclined to follow the traditional post-college path into employment.

Instead, she formulated a vague plan to fund her desired exotic lifestyle through passive income-generating websites. She would then use her adventured experience to start a non-profit to develop her  vision of “health, human potential, and a life well-lived.”

Jane’s plan to generate passive income from websites didn’t pan out. Having dropped out of college and needing money to eat, her sights shifted instead to making ends meet. Jane had made the fatal mistake of cashing in on control, while having little career capital to offer in exchange.

For an example of external resistance, Newport tells the story of a software developer named Lulu Young. After college, her first job was the less-than-glamorous role as a QA tester.

Rather than become frustrated with her low position on the totem pole, Lulu took matters into her own hands. She went down a rabbit hole and developed scripts to automate testing. This offered immediate value to her team, and she was quickly promoted.

At this point, Lulu made her first attempt at cashing in for more control. She asked for a 30-hour work week so she could pursue a graduate degree part-time. Her employer didn’t like this idea, but she had become too valuable for them to say no.

Similar stories repeat throughout Lulu’s career. She subsequently changed jobs multiple times, each time  cashing in for more control. Today, she is a freelance developer and makes her own schedule. But it wasn’t easy pushing through multiple points of resistance to get there.

Each time Lulu cashed in, she faced pushback from her employer as well as friends and family. Newport argues that this resistance takes thick skin to push through, and that it would be enough to keep most people right where they are.

I’ve personally found the lessons of this book to be profound and immediate. In the admittedly small amount of time since I’ve finished reading, I’ve made key changes in my daily approach. It remains to be seen if these changes will sustain, but I believe they will.

I can point to a few other examples in my life where big ideas immediately clicked with me, and immediate action was taken. Those actions have indeed sustained to this day.

There are so many nuggets in So Good They Can’t Ignore You, and it would be impossible to cover them all here.

The highlights above, and the stories behind them, provide powerful examples that can be used to achieve remarkable work. They are just the tip of the iceberg. Newport interviewed many subjects on his journey to answering the questions posed in this book, and each offers a compelling story.

The value of this book lies in those stories, and they are told in a relatable, immersive way. For that reason, I would highly recommend picking it up.

A Lifetime of Earnings

Money Is A Vice That Distracts Me From My Shortcomings